Here's a delightful film I've been meaning to review for a while but never got round to. I watched this a few months ago alone on a rainy night on a laptop in my bed. It's not how I usually watch films but I was freezing cold. Normally I try to make the experience of watching a film at home as cinematic as possible but for this strange little film, it really didn't matter.

Cream In My Coffee stars Lionel Jeffries and Peggy Ashcroft as an elderly couple visiting a hotel in Eastbourne - the same hotel they visited as a flighty young couple in the 1930s, in secret from their disapproving parents. The film switches between the young couple and the old, highlighting the changes that have occurred since they were there first. The waiters are condescending, the music is terrible, and they don't seem to be enjoying it as much. Maybe that's because they're constantly at each other's throats - Ashcroft's fussing only inflates Jeffries' cantankerous disposition towards everything. He has good reason to be obstreperous and moody, and Ashcroft has even more reason to be fussy, and it's not until later we realise why she has put up with this difficult man for so many years, for her sins - something I won't reveal here. 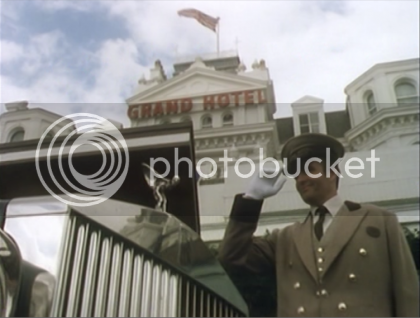 The film is set almost entirely in the Grand Hotel in Eastbourne. Hotels are wonderful places to set films - they always exist as a sort of dreamy, watchful womb to contain the characters, and more often than not, hotels are portrayed as foreboding, and usually contain ghosts from ages past. Stanley Kubrick's The Shining has probably sprung to mind. These two films were released the same year and would make a great double bill sometime; the similarities, particularly in the denouement of each, are striking.

That's not to say this is a horror film. In fact, neither film is really a horror film. But where The Shining plays to the subconcious and makes you feel uncomfortable, Cream In My Coffee is dreamy, nostalgic and mysterious - the sequences from the 1930s are filmed in pastel hues with a very soft focus, as seen below. The hotel is not quite so stylised as Kubrick's classic, particularly in the latter years, but that's very much the point. At times you almost feel as if the hotel is about to close down - there are rarely more than five or six people in the frame until the end. 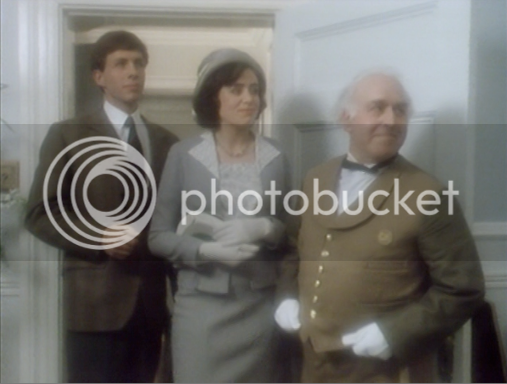 Throughout the film are a series of seemingly banal encounters, which ultimately mean something to the audience and Jeffries' character in the final moments. There's also a shady nightclub singer - a Dennis Potter archetype - who has a major effect on the outcome of the story, played by Martin Shaw.

It's a dreamy little Sunday evening film which I highly recommend, particularly if you're a fan of Dennis Potter's more well-known fare. It's available on a DVD from LWT and was originally aired on the 2nd November 1980. A bargain with two other great TV plays on it! http://www.amazon.co.uk/Dennis-Potter-London-Weekend-Television/dp/B000AGK0ZE/ref=sr_1_3?ie=UTF8&qid=1347644524&sr=8-3
Posted by Publius at 18:42

Great review! I need to get involved with Dennis Potter dramas, especially this one. I've not even seen The Singing Detective!

Thank you! They're well worth getting into. The Singing Detective is the best one, save it til last ;)