RUSSKAYA SIMFONIYA is the third part of Ukrainian director Konstantin Lopushansky's so-called 'Apocalypse Trilogy', which also includes PISMA MYORTVOGO CHELOVEKA (DEAD MAN'S LETTERS) and POSETITEL MUZEYA (A VISITOR TO A MUSEUM) the latter of which was my first review on this blog. It's been almost two years since I sat down one night to view that film, an experience which stayed with me for some time, and led me to start this blog in the first place, asking the question 'How can a film quite this remarkable have been totally ignored for so long?' We are forever discovering Orson Welles' lost this and John Huston's forgotten that, but why do films made by directors in our era, who are still with us on this mortal coil, get buried in obscurity, existing only through word of mouth from those people who saw it when it debuted at Moscow Film Festival before perishing completely?

It took me a while to revisit Lopushansky's work, as it is tough going. Andrei Tarkovskiy is beatified in the whole of Europe and beyond for his spiritual contributions to cinema, but for some reason Lopushansky has not been treated with the same reverence and I still can't figure out why. His films, particularly the one currently in question, may not be Cannes fodder like so much of Europe's output, and they certainly have production value. A tremendous amount of extras were used in RUSSKAYA SIMFONIYA, such as the children in the orphanage, the military, the people in the streets, the soldiers dressed in period uniform for the Last Judgement. It can't really have been a low profile production, can it? It staggers me further that this film was made in my lifetime - only 19 years ago, and entering a google search on this film draws almost a complete blank.

So anyway, I tracked down a copy after finding DEAD MAN'S LETTERS and enjoying that (albeit not as much as the mighty POSETITEL MUZEYA) but was irked to find no English subtitles exist for it. A chance happening upon Lopushansky's MUBI page brought forth an Angel from the Lord himself who showed me a link to a recently developed fan translation for the film. I downloaded it instantly but neglected to watch the film until last night. 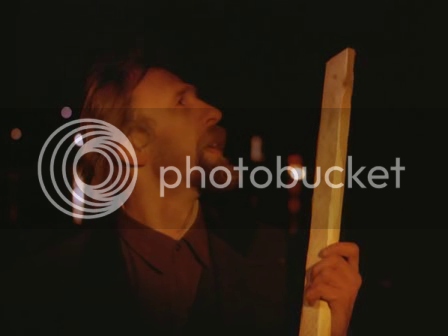 Viktor Mikhailov, the actor from POSETITEL MUZEYA, returns here in a similarly ascetic role. The film opens with his character, Ivan, trying to remember what he was doing when he heard about the world ending, before he hastily rushes out to prove himself to God by rescuing some children from a slowly sinking orphanage. He is ridiculed and shunned along the way by drunkards, writers, neighbours and even the military. The world is most certainly ending. The utter murk and gloom of the first two films reaches fever pitch here, being filmed almost entirely through orange coloured gobos, and almost always having some source of flame in the frame.

The film's title is particularly apt. It is a very, very Russian film. Ivan talks endlessly, to anyone who will listen, how he is a Russian Intellectual, 'descendent of Tolstoy, Dostoyevskiy...' to invariable balks and snickers from his audience. The other characters aren't much less blustery - as Ivan crashes a Government official's party to beg him for help saving the children, he enters the kitchen to see the diplomat reading passages from Dostoyevskiy's 'The Idiot' to his mother. The impression I got from the film is that all of the characters, in one way or another, are too wrapped up in their own follies to be righteous and try to do some good in the planet's twilight hour. Ivan spends far too much time waxing and waning about what is the right thing to do, while simultaneously lacking any sort of verifiable conviction in his goals - he has to eat a raw onion to produce tears so that he might persuade a General to lend him a boat, or a helicopter. Does he have the fear of God in him, or the fear of punishment and death? 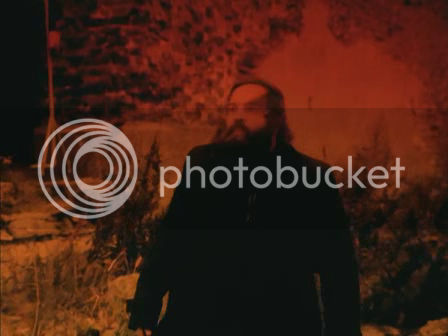 At one point he meets a writer, presumably of populist fiction or television plays, who he asks for advice writing a letter to the military department who had previously ignored his request for aid. Perhaps naturally it proves ineffective and he is knocked back into the street, only to be distracted by another dream (he has many dark and troubling dreams...indeed this film is one long dark and troubling dream).

The third act of the film descends into utter madness as 'the time comes'. The details are best left unsaid, but (I think) there's a twist. I'll have to give this another viewing, and perhaps spend five years studying the Russian Orthodox ways before this whole thing makes complete sense, but the closing 20 minutes or so are dark and filled me with such a terrible feeling of despair and hopelessness that I didn't think I could take any more. It's surprising, as being completely irreligious in every way, I totally bought into every inch of Ivan's spiritual journey and felt the film to be a very interesting take on the end of the world, Christian style. There is a horrific sense of hopelessness watching families sit and cheer, as if at a school sports day, as Ivan gets up to the podium as some sort of Icon or Martyr, to usher the world into darkness. And I've almost given too much up already. You get the message, I'll leave it there. 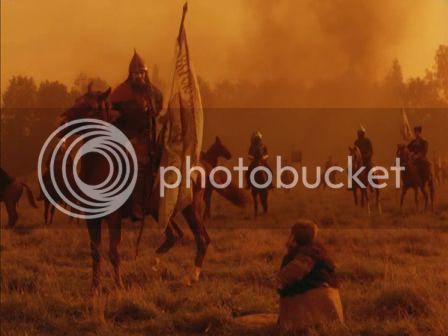 There's a copy of this floating around on the web. the quality is decent for a 700MB avi. All of the dialogue in the film has a strange reverb effect on it but I'm fairly certain this is deliberate and not a flaw with the file as the music and incidental sounds are unaffected. The subs should now be much easier to find and despite some dodgy spelling are easy to read and well synchronised. Please, please, PLEASE seek this film out so I am not the only person in the English speaking world who has seen it!